What is HIFF? Five years ago, HIFF was founded with the goal of creating an independent film festival that presents films and narratives created mainly by Palestinian directors and an array of selected films from the Arab world. It was a result of a non existent stage for Palestinian films whilst local productions were being screened in international festivals in various other countries. The founders of the festival believed in an ideology that included an independent autonomous cultural festival that is free of any state sponsored funding, bureaucracy or censorship.

- To provide cultural outreach to the surrounding community as well as to expand reach-out, appreciation, and cultural relevance of films and the art of storytelling and cinematography.

- To present unique masterpieces that receive little or no visibility anywhere else in our localities with focus on Arab films, and other international selections that speak our language both literally and metaphorically to be enjoyed by international and local audience.

- To create an environment where local filmmakers and their films are the priority.

- To create festivity and cultural happenings in one of Palestine's and the Arab world’s most emerging cultural capitals.

- To answer the needs of the hundreds who support HIFF by applying their demand of taking advantage of independent spaces in Haifa that have been neglected and unused to be turned into a place for cultural capacity building and exchange.

Moreover, HIFF relies on the support of the local community and on cultural Arab foundations that believe in the ideology and principles of the Haifa Independent Film Festival. Unfortunately, we are still in an age where we are limited to access to foundations due to the shortage of resources. While HIFF is a volunteer based, low budget festival, there are costs that need to be paid to achieve our goals.

- Technical equipment to show films in the best quality possible.

- Film distribution fees to support independent directors and to create the most diverse program possible.

- The accommodation of international guests that are interested in taking part in the flourishing Palestinian film industry.

- Marketing expenses that diversify our audiences from all different parts of Palestine. 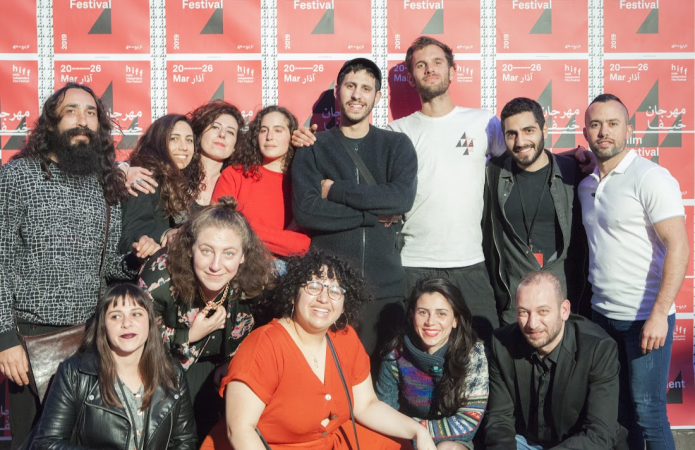 Who is behind the creation of HIFF?

We are a diverse group of mostly female, male, and non gender conformists based in Haifa and around the world coming from backgrounds in cinematic production, cultural and political activism, cultural management, marketing, and media. The team of HIFF all share and relate to the ideology of strengthening an autonomous cultural center in Haifa free of governmental funding, bureaucracy, and state sponsored collaborations.