My name is Krzysztof Foryst Dąbrowski, a.k.a. Chris Foryst. I am 28-year old guy from Poland, daily struggling with his life after many screwups.... but not about that.

Roughly two years later, I became a part of Classic Tetris community. Despite my skill being abysmal, I wanted to be useful, so I let my data-addiction let loose... and it had a very positive and surprising outcome.

I managed to gather almost all Classic Tetris tournament data in one place. Including all tournaments I got an info, starting on World Championship, ending with local tournaments in Germany, Australia or Singapore. I also managed to compile a pretty accurate list of all maxouters - people, who reached the "ultimate score" of 999,999 points in Tetris.

I got myself involved into community as an organizer, too - I became the main organizer and commentator of the 1st ever Classic Tetris tournament in Poland (CTWC Poland 2019), I am one of the people responsible for CTP - monthly online tournament made for players playing PAL version of this NES game. I also organize CTE - weekly event hosted each Thursday, where every interested player may compete, despite his skills and version. 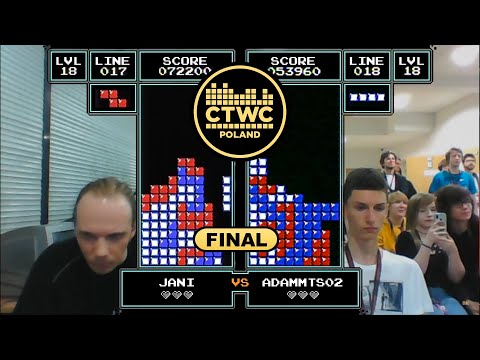 I have reached the critical point - despite my best efforts, that's all I am able to do without money. I want everything - both the Classic Tetris research project and communities I am in - to grow bigger and better.

I want to do more, but for that I will unfortunately need funds...

If possible, I would also like to bring good players from Poland to the International real-life tournaments with me.

When I checked the costs, it shocked me - To send one person from my country to Copenhagen, I need about 300 €. Costs to Portland are triple as high - about 1000 €... I can survive living on minimum wage in Poland (about 400€), but "surviving" like that means I can't save more than a single digit amount of zlotys each month for the project.

The sooner I would be able to gather funds, the faster I will be able to get these tickets - there is a chance that the prices may be lower that expected, which will result in bringing even bigger part of the national community.

CTWC 2020 will be hosted most likely on August next year, during Portland Retro Game Expo. That means I would need to get enough money for at least one person at least 2-3 months before the event.

Until now it was me, who tried to support others, sometimes even sacrifising myself to help someone else. Each single donation will allow me to continue and improve all the Classic Tetris project I am involved in.

WOOP! Tetris for You!

I'll shout your name during my qualification attempt in Portland when I score a Tetris.

I'll shout your name during my qualification attempt in Portland when I score a Tetris.