Bombing and militarization of indigenous peoples’ communities, rights violations, and blockade of humanitarian missions. It’s like the early 2000s all over again in Mindoro. This time without Jovito Palparan in the picture. But the overall portrait of a community under terror is clear and familiar if not identical.

The island of Mindoro, famed for its beaches and rich natural resources, is once again receiving the brunt of militarist policies of the state two decades after it was turned into a killing field by a military unit under the command of then Brigadier General Jovito Palparan. Palparan, who earned the moniker “Berdugo,” was Gloria Arroyo’s top henchman and implementer of counter-insurgency campaign during her almost 10-year incumbency. The period is remembered for a spate of human rights violations and state violence that left hundreds dead and forced entire communities, Mangyans in particular, to flee their villages and seek refuge in towns off their home island.

In May of this year, Mangyan communities have already sounded the alarm about the increasing presence of military in their communities, especially those standing above mineral deposits being eyed by transnational mining corporations and which are, not surprisingly, being heavily guarded and patrolled by the military.

During their annual gathering and cultural celebration called “Mangyan Day,” the indigenous peoples have reported that some delegations have been stopped at gunpoint by state forces. Delegates were reportedly asked to alight their rented vehicle and had their photos taken.

The situation has turned worse since the Mangyans concluded their 12th assembly. In June 14, 2019, tribal leaders sent distress calls, reporting incidents of strafing, bombing and deaths of three still identified bodies in the town of Mansalay.

Humanitarian and human rights organizations has quickly responded to the distress calls but are, at the moment, still unsuccessful in reaching the IP communities because of being subjected to harassment themselves. Reports from the humanitarian mission said the group has been blocked two times already by state forces. In one instance military personnel pointed their firearms at the group’s service vehicle.

Reminiscent of past horrors and strategies employed by Palparan’s men, the military encountered by quick response team also denied paralegals access to the remains of slain individuals on the flimsy grounds that they are not relatives. Human rights worker Peti Serrano called such move by the military straight out harassment and also foolish. “How can we know who the family or relatives are if we can’t identify who these dead people are to begin with?” argued Serrano.

Karapatan-Southern Tagalog, which leads the humanitarian and fact finding mission, expressed fear that the continuous isolation of the affected Mangyan communities can further aggravate the situation in the area. The group appeals for support for the ongoing efforts to bring urgent assistance to the distressed families and individuals and, at the same time, for what it foresees to be a long-term struggle to defend Mindoro’s people and resources from state-sponsored pillage and aggression.

This is not an isolated case of human rights violations. This is the reality under the terror being spread by US-backed counter-insurgency program in the Philippines -- Oplan Kapanatagan. The provinces all over the Southern Tagalog region experiences the same. Recently, 3 farmers who are also leader-activists in Quezon were illegaly arrested by the military. The youngest victim of Duterte's War on Drugs, a girl named Myca who wasnjust 3-years old was gunned down in a shoot out in Rodriguez Rizal. Moreover, 17 among 400 NutriAsia workers who put up a strike in Cabuyao Laguna were filed with trumped up chargers despite their legitimate demand for regularization and decent wages.

The government, who is a puppet of China's goverbment under onerous loans and unfair agreements do not pay just interest in the recent Recto Bank incident where Chinese militia hit Filipino fishermen and their fishing boats. Their response remain in favor of the growing imperialist country, China.

The US-Duterte Regime becomes more passive and worthless. It has no longer serves the interest of the Filipino masses. The people of Southern Tagalog is firm to its stand to Unite and Fights against Fascism, Dictatorship and Tyranny! It is now more than ever that the people need to stand firm and call for the ouster of the number one terrorist in the country -- Duterte, together with its militarist minions in the government.

We are calling for donations and support for the success of our People's SONA. Our caravan will begin on July 18 from Calamba Laguna and will end on July 23, 2019 at National Capital Region. 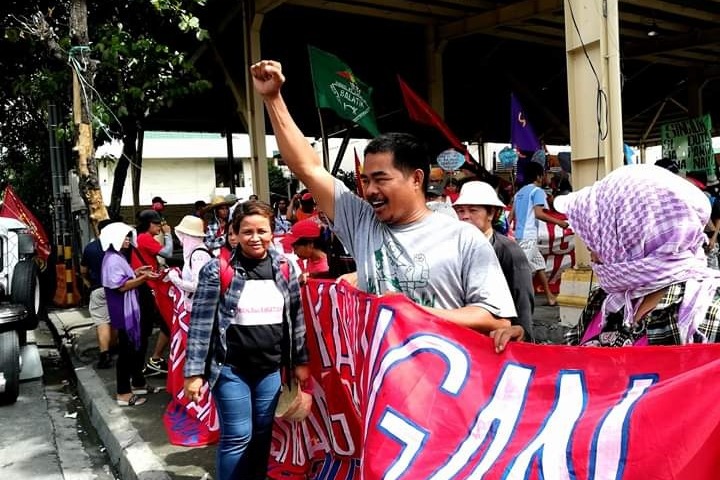