WHAT ALL TEXANS SHOULD KNOW BEFORE IT’S TO LATE!

#2 If you don't do #2. Don't bother with one it is senseless since only you know your wishes and you areNt talking. S through with #2. FILE IT WITH YOUR COUNTY CLERK YOURSELF NOT YOUR ATTORNEY OR PARTNER OR SIBLING OR CHILD. YOU FILE IT. THIS WILL BE KEPT SAFE AND YOUR WISHES WILL BE GRANTED. IT IS SAFE FROM BEYING DESTROYED, ALTERED, ANOTHER BEING PRESTED AND FORGED. IT WILL SAVE YOUR FAMILY. THEY CAN'T BE MAD AT EACH OTHER BECAUSE OF YOUR WISHES. THE MONEY I WANT TO RESTORE MY FATHWR'S WISHES AND BE HEARD BY THE COURT SO THAT I CAN SHOW THWM THE PROOF OF THE ALTERED WILL THE LIES THE ILLEGAK ACTS THAT WERE COMMITTED AGAINST HIM AND HIA DAUGHTER AND GRANDCHILDREN. My apologies for all caps this is my true goal is to let the truth be told and hears and put theae pwople in jail for their acts. Believe me they would have me in jail if they could in a flash only to keep me from messing up their plan of not being caught. IF I DON'T STOP THEM THE GOOD GUY DOESN'T ALWAYS WIN. BUT I DO KNOW MY DAD IS GOING TO PUT A SIZE 14 BOOT UP THEIR BUTT WHEN HE SEES THEM AGAIN SO ONE WAY OR ANOTHER THEY WILL SUFFER THE CONSEQUENCES OF THEIR DECEITFUL CRUEL ACTS OF GREED BY WAY OF STEALING VREAKING THE LAW INTENTIONALLY YAL TO LINE THEIR FAMILIES POCKETS. I CANNOT BELIEVE IT THERE WAS ENOGH FOR US ALL TO BE HAPPY THWREBWAS NO NEED FOR THIS ALIENATION TO ME AND MY GIRLS. I NEVER THOUGHT IT WAS ALL MINEBMINE BUT HIS COMMON LAW WIFE CERTAINLY TOLD ME FACE TO FACE WHEN I ASKED FOR THW WILL with the coldest blackest eyes I have ever seen "EVERYRHING IS MINE AND I WILL DECIDE NOW" She got it all o including my family heirlooms that mean nothing to her or her family. My grandfather was a Texas State Trooper her in Austin Tx He was one of the first DPS trooper's to ride motorcyles on patrol. He retired from Tx DPS and they gave him many awards metals his servis revolver which my dad as well carried everyday after my grandfather paased and his gold watch for hia long service to The citiEns of Texas the list goes on and on. Now morally or politicay correct thing is to give those heirkooms to his family I am his only child along with 2 beautiful grand daughters one he said he was paying for her college as long as she made the grades and went to None the less University of Texas. Anyway thst is my gofund goals. The following is my story and proof is in there too. It is in rhe Pudding yal. Thankmotoexyles

nform all Texans about the law when there is the passing of a loved one. Everyone knows you should have a will and most can't afford an attorney or something drastic has occurred where the will they do have needs to be updated immediately. People have the right to hand write last wishes and it be a legal document in Texas and can be validated by the courts.. The problem is today's technology in printing. The law says the holographic will is a valid will if it is solely in the person's own handwriting. Meaning no typed words on the document. Here's the kicker and contrary to many that believe otherwise, NO ONE HAS TO WITNESS THE SIGNING OF THE DOCUMENT NOR DOES IT HAVE TO BE NOTARIZED!. Travis County Probate court in my case did get 2 people to testify that that was my father's handwriting. Again, Today's Technology in printing and applications can add or take away anything from a document. Another point is there are printers that also print using the same ink as in a ball point pen. Here is my case and before I show you this will please know that my father did write this will and rightfully so at the time it was written. I deserved exactly what he wrote. He did not sign the will though. In 1999 was when it would have been written in 2010 is when he ran across it when cleaning out files in his office. I worked for him at that time and he was laughing about it but we got into a debate as to whether it would be admitted in court and what he believed had to be notarized or witnessed per his own words is not so in Texas. His other argument was he didn't sign it what he did do was write a statement on it somewhere at the bottom stating this is not his wishes and is not be used he revokes this document in it's entirety. I again said to him dad anyone can tear that off and still use it he handed me the paper and said then you do it so it cant be used. I should have tore it up right there but I instead wrote the word **VOID** through each paragraph except at the bottom where his statement was and he had dated and signed the statement not the will's intent but his revoking the will. I have spent $21,000 on attorney fees trying to make this right and I have no more savings. I worked for my dad and when he passed my common law step mother had me locked out of all my dad's vendor accounts that I worked on for my dad at Austin Mattress/Beds-N-Brass. She also had her boys go in and strong arm the manager and take everything from my dad's office before they even notified me of his passing. Lost my dad my job and what I thought was family all on Father's Day 2015. It is coming up to the 2 year deadline that I can contest this will. If you believe injustice has been done by Travis County Probate Court in accepting this will as valid then please donate to the cause of me fighting this criminal act against my father's wishes and long hard work to provide for his family. He had a will in place but it was destroyed by the common law family. I have seen the will before but did not read the whole thing because it was forbidden you read a will before the person has passed. I am his only child and I like so many other Texans cannot afford to fight the low greedy liars who steal by criminal acts of deceit and alterations. Oh forgot to add in that one of the sons is professionally employed in networking security for a high tech company. He went to school and has a computer science degree. Go figure. The common law wife and her sons took everything including my dad's inheritance from his parents, the heirlooms that were to be passed down to me but were not. .My situation is not unique there are many many people I have run across since this has happened that the same scenario or close to it but they didn't have the money to fight and prove their case in court. You might suggest legal aid. Nope don't handle contesting of an estate sorry guys you lose everything. I hope to raise enough money to hire an attorney that knows the probate law in Texas and can see the injustice and criminal acts that have occurred. My father did not know I am positive that his partner would kick me to the curb heck I didn't either seeing I never had problems with the extended family. But when there is money involved about 3 million in assets and money then peoples true colors shine through. Thank you for reading if nothing else parents will and your will is either done with an estate attorney or if it is handwritten the county clerk will store your will for you so no one can alter it. Thank you and here is the will that is in question you decide for yourself. Of course since it is pictures from my phone 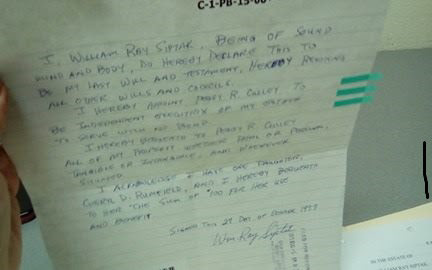 I will help you see what I wrote in 2010 under my dad's instructions. Here I have only darkened the picture. Can you see it yet? The ext one will show you exactly where the words were written then come back to the one above and see if you think a criminal act occurred not only against me but to the legal system in Travis County Texas. 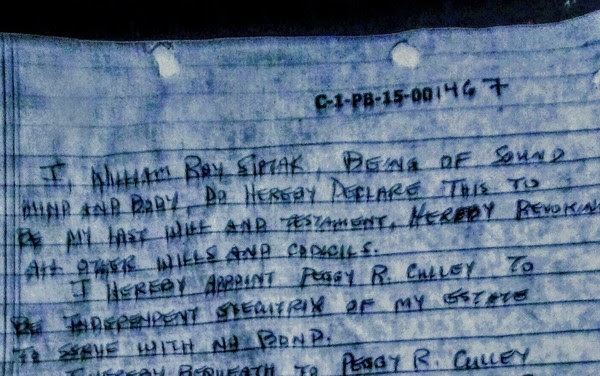 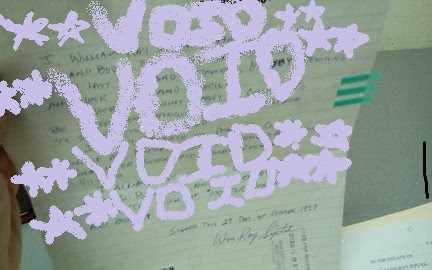 i wrote with a thick marker on the original document. here i just illustrated to point the words out so that it helped you see the outline of the document that was not my father's last wishes by any means. He never signed the will but he revoked it and under his instruction told me to make it so it cant be used. I wrote the **VOID** ACROSS EACH PARAGRAGH IN 2010.