Please SAVE my dog from this tradegy.

Troy is 8 years old who has always been healthy active and bubbly. Recently, all he could do is sleep. He stopped wagging his tail when I come home and he starting losing his appetite. I thought he fell sick so I brought him to the vet.

After doing a couple of scans and tests, the vet told me that he has grown a tumour at his spleen area which it pushing his intestines behind. As such it makes him extremely uncomfortable. The worrisome part is that the scans suggest that the tumor might possibly have spread to his liver. This makes the procedure even more complicated and requires a specialist to operate.

The reason why I’m reaching out to you is because of how expensive this procedure is. I need help... I’m currently serving my compulsory national service which gives me about $SGD800/month and I live with my grandma and a dog. My service term does not allow me to moonlight as it’s against the law and as such I can’t find part time jobs to supplement income for this procedure. I’m giving as much as I can and this campaign is a call for help to anyone out there who is willing to help me out a little.

This procedure needs to be done by the end of this week (11/10/2020) as his vitals and red blood count is still healthy. This means that he wouldn’t need to undergo a blood transfusion if he undergoes the surgery. 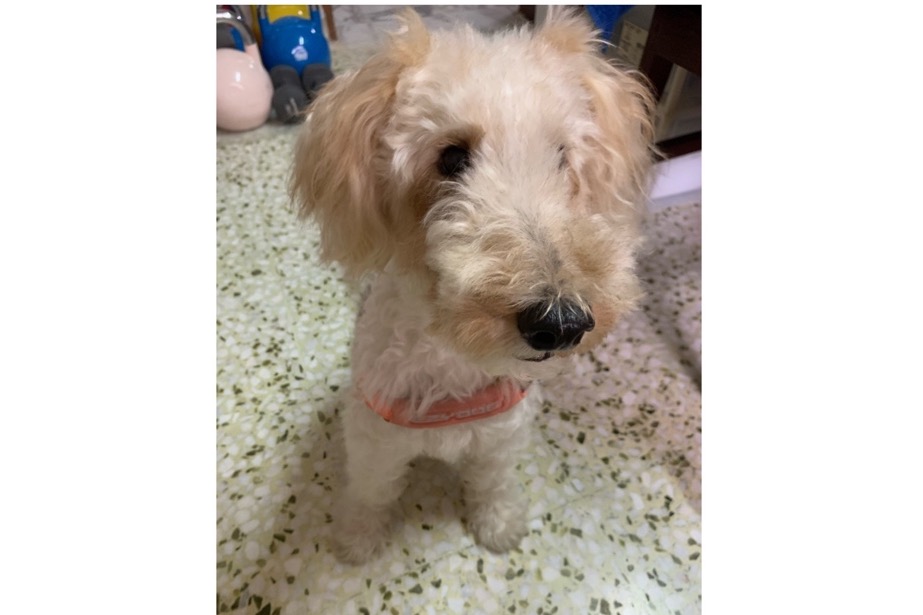 Please help me save my dog. He doesn’t deserve to die because of my financial incapability. I’ll be eternally grateful. He has been my 80-year old grandma’s companion while I’m out serving and I really don’t want to see her so devastated...

For those who can’t afford to donate, my only request is a sincere prayer for my dog and my family at this current point in time.

Troy has been discharged! Praying for the best!
Update posted by Julian Lim On Oct 09, 2020

Hi all, thank you to all dog lovers and kind souls our there who have supported me and Troy throughout this entire season!

Troy has officially been discharged. At this moment he is resting at home.

I’ll update this post with more details as soon as I can!

Hi all, I come bearing news, good and bad. The surgery has ended, the vet has managed to remove the mass that was found in Troy. However, it had been made known to us that the mass has attached itself to Troy’s stomach and pancreas. Also, because of the separation of the tumour from his pancreas, there might be a possibility of him suffering from pancreatitis post-op. As such, the initially thought to be simple procedure was made very complicated and this could mean several things..

A snippet of a conversation we had with the nurse who is not involved in the surgery.
To be really honest, I was bawling as this point in time..

We do not know the nature of the tumour at this current point in time. (Malignant or Benign) The vet has mentioned that by the way the mass is so invasive, it possibly could be malignant. Now that the tumour is removed, it’s good news. However, we are not out of the woods. Because in the event that the tumour is malignant, the possibility of the cancer cells spreading to his other organs is very high and this would shorten his life span dramatically. I do not want to disclose anything at this current point in time as the facts have not been made firm yet. The left is the mass that is being removed, the right is his spleen.

You all might have noticed that I have increased the donation goal by $1,000. The reason for this increase is for the next step in Troy’s journey. We would need to take the sample of his growth to the lab for confirmation if it’s malignant or benign. This lab test would also give us light to a few things like if he can make a full recovery, in the event if it’s malignant; what kind of cancer is it and how long does he has to live. I’m tearing as I’m typing this, it breaks my heart to know that my family member has a possibility of leaving us like this.. Troy is now awake, still very groggy after such a long surgery. Visitation limited to 1 person at a time.

But that being said, I’m extremely grateful and encouraged to know that all you have been keeping him in your prayers and supporting him the best that you can. He is now awake and is resting in the vet for recovery, the vet suggests that we leave him here overnight for close observation to ensure everything is okay. I want to thank all of you from the bottom of my heart. Thank you for supporting a fighting chance for him. We are not out of the woods yet but I’m very glad that we guys are willing to fight hard and fight together alongside Troy through whatever means possible.

Hi guys, the surgery is currently on going. The vet warns for a possible need for a blood transfusion as Troy has loss an unwanted amount of blood during the surgery. Please help me share this!!! Add a Comment
Abdominal Ultrasound and Deposit for surgery
Update posted by Julian Lim On Oct 05, 2020

Hi guys, thank you so much for all your kind donations and generous efforts in terms of prayers and advice the past day. Thank you for lending a helping hand, all I have is gratitude for each and every single one of you.

[5/10/2020; 11 AM] Today we headed to Westside Emergency @ Eng Kong Terrace for the clearer abdominal ultrasound to check for the possibility of the mass spreading to Troy's liver. The entire scan took about 2 hours+ and cost $395.00. The sonographer was warning that the potential bill for the ultrasound could have cost $500+ because of the need of putting Troy under sedation if he was not able to remain calm/still for the procedure. Luckily Troy was tame and calm throughout the entire thing and we ended up needing to pay only for the ultrasound itself. Upon completion, we took Troy to the vet back at Mt Pleasant for a review of the test results. THANK LORD that his tumour has NOT spread to his liver and as such the cost of the surgery to remove his tumour has drastically decreased. The medical bills that would need to be paid would be based on Scenario 1's calculation. (Refer to first update post) Truly am very relieved by this news, this also means that the possibility of recovery from this procedure is extremely high. Because of ALL of YOUR donations, we have managed to pay not only for his ultrasound today but also the deposit of the surgery to proceed. Regarding the rest of the funds, I have to be honest and say that I'm not sure where we are going to find it. But I have faith that there will be a way to reach this goal and target. For now, we are trying to work something out and we will let Troy proceed with the surgery as scheduled first becasue we can't afford the condition to turn for the worse.

Once again, i'm really thankful for all your contributions and all your kind heartedness throughout this period. God bless you all! [4th October 2020]Today, we brought Troy for an x-ray scan and blood work required to for the vet to see if there is a growth inside of his spleen. Upon confirmation, the vet says that the tumor was very close to his liver as such she was not able to confidently tell me that he can go under the knife at the moment.

As such, she needed me to go to another location (Eng Kong Terrace- West side Emergency) for a more detailed scan and for the scans to be seen by a radiologist for better confirmation and clarity of what procedure Troy has to go through. This scan will take place tomorrow [5th October 2020 @ 1130AM] which would cost another $400. Currently there are 2 scenarios for Troy:

1)Upon the scanning tomorrow, if the tumor has not spread to the liver the procedure would be relatively safe and easy. The cost of the procedure of this scenario is above. ($3,490.28)

2)However, if the tumor has spread to the liver and has created lesions of some sort, the vet suggests that I bring Troy to see a specialist because there might be a possibility of having the need to remove a part of the liver. This operation that would be performed would cost on upward $5,000.

So the total cost of the procedure in reach scenario is:

Julian, sorry to know Troy and your family are going though so much during this stage. Understand you are living with your grandma and Troy and you are doing NS, so it will be a heavy burden for you. Please be strong and please take good care of Troy. Sending my prayer to Troy and may he recover fast and well. Take care and stay strong.

Sorry I can’t give much Troy has been discharged! Praying for the best!

Hi all, thank you to all dog lovers and kind souls our there who have supported me and Troy throughout this entire season!Troy has officially been discharged. At this moment he is resting at home. I’ll update this post with more details as soon as I …

Hi all, I come bearing news, good and bad. The surgery has ended, the vet has managed to remove the mass that was found in Troy. However, it had been made known to us that the mass has attached itself to Troy’s stomach and pancreas. Also, because of …