This is Rory when she was a baby. She was born on May 1, 1997, the youngest of three but definitely the cutest among us siblings. 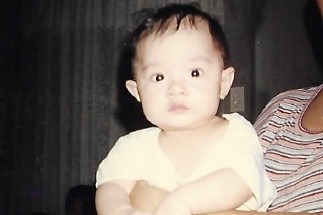 And this is Rory and I, probably more than fifteen years ago, before digitally edited light streaks became mainstream. 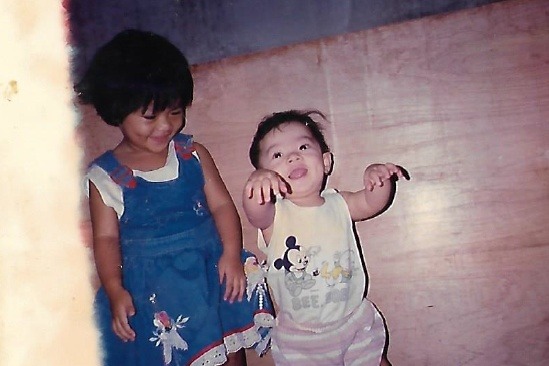 I don't particularly remember this moment but this is one of the very few remaining photos we have. All other pictures were destroyed because of Typhoon Sendong last 2011.

Rory sang and danced whenever she was asked to do so when she was younger. She tried to learn so many things as a kid- she took singing classes and swimming lessons; and taught herself to play musical instruments (soprano recorder, acoustic guitar, electric guitar, and ukulele) and other languages.

She has listed the moments she cherished in her gospel book when she was in second year high school. Some of them were when she went to the stage to wear her medals and riding the zipline. She also wrote, "There are many more that I haven't mentioned but to sum it all up, I would say that I cherish every moment of my life, for a lot of reasons that are many to mention." 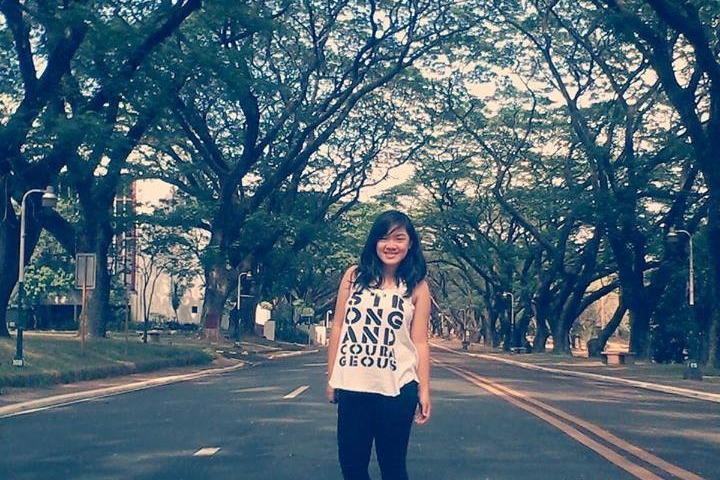 Two years ago, Rory was a BS Computer Science student of the University of the Philippines-Diliman. Even on her first few months in the University, she has been an active student in her classes and chosen student organizations. She once cross-dressed for her communications class.

On her third semester in UP, her body started to deteriorate. She suffered from frequent asthma attacks to which the infirmary doctor diagnosed her with allergic asthma. There were weeks that she would be sent to the infirmary almost every other day. She had persistent fever and fatigue. Her weakening body took a toll on her mental health. It was around November 2015- in the middle of the semester- when it was decided that she needs to rest.

A large lump on the left side of her neck was then observed a month later. An X-ray, CT scan, and two biopsies later, Rory was diagnosed to have Stage 2 Hodgkin’s Lymphoma. Lymphoma is a cancer of a part of the immune system called the lymph system.

Only her closest friends and our family knew about her illness. She wanted it to be kept a secret from everyone because she did not want the attention.

Her first set of chemotherapy began around January 2016 and ended on September 2016. She endured a total of 6 cycles, 12 sessions. She never liked needles as a little girl- but she overcame it call. Her CT scan after the chemo, however, indicated there was some mass left. A month long Radiation therapy began thereafter. At this point, she hated the smell of rubbing alcohols and hospital linens' fabric conditioner because it reminded her of the pain and discomfort she suffered during those therapy sessions.


It was less than three months when we discovered that her cancer relapsed. This time, she was recommended to undergo a stronger treatment. Her doctor in St. Luke's suggested second line of treatment be used because the side effects were not as drastic as the previous medicines used during her first chemo. After this, she would have to undergo Autologous Stem Cell Transplantation (ASCT). Autologous means that the stem cells drawn from the bone marrow will be obtained from the patient's body. 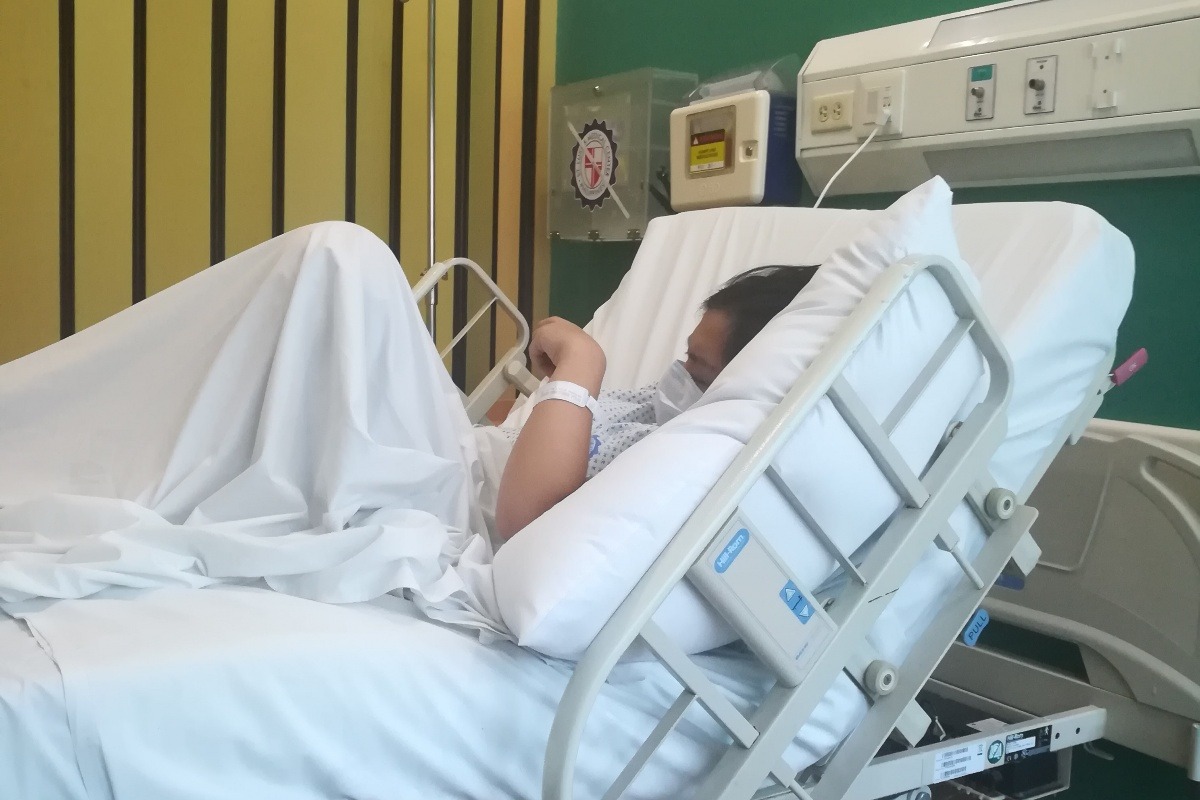 Rory succeeded in her first stem cell harvesting from the bone marrow and produced beyond the target number of needed stem cells. I did not hear a single complaint nor flinch from her, even when a 12-inch syringe was inserted around her thigh bone.

Her stem cell transplant was initially scheduled on May 2018 but was postponed due to financial concerns. Our family only wants the best for her. We have already exhausted our resources so we can pay for the medical treatments. We have also availed the service/medical assistance provided by the government. We haven't raised enough yet. We were told to prepare up to 2,000,000 pesos. We are desperate for your help so we can afford to pay for her stem cell transplant. She is only 21 years old, still full of dreams. We are hoping to push through with her transplant on July 2018.

Please help us end this painful chapter of her life and move on to a better and meaningful one.

Please don't hesitate to contact me should you have more questions through my mobile number: 09976022128 and/or email: [email protected] This is Rory just a while ago enjoying the beautiful sunset view from our temporary home in Quezon City. For several minutes, she marveled at the spectacular horizon, rich and varied hues, the clouds like great wings of gold, yellow, purple, and rose color. It was a breath-taking sight she wanted to cherish. I took a snapshot of this moment because that's what stage Ates usually do.

This update is a little bit overdue. The last update I wrote was Rory's Day 1 of the stem cell transplant and this should have been Day 16. Her first cycle of chemotherapy was finished on the morning of Day 2. Complications unfortunately occurred on the afternoon of the same day. That afternoon shocked our family. I found myself in the waiting room that night fervently praying to God to save my sister. We are thankful to the medical team and especially to God for saving Rory. She was supposed to have her second cycle of the chemotherapy on the third day. The stem cell transplant should follow on the same week. The complications, however, made the doctors decide to hold-off the transplant until she is cleared.

She was discharged on 27 July . Three check-ups with her doctors were scheduled on the next week. Once she is cleared to proceed, her pre-transplant preparations will commence once again. As Rory struggled to breathe and endure intense pain that day, she told me that she enumerated all the people (family, friends, and relatives) and the reasons why she should fight back. Some of the reasons she recalls are the simple joys- watching sunsets, learning, breathing air, eating pizza, and listening to Billy Joel's music. Having survived that day affirmed her belief that her secret weapon to winning her battle against cancer is her faith.

For now, she is regaining her strength with an even stronger resolve to win this.

Rory was diagnosed with Stage 2 Hodgekin's Lymphoma last January 2016. Even after a series of chemotherapy and radiation sessions, her cancer relapsed on February 2017. She is undergoing a second set of chemotherapy sessions using a newly developed drug specialized for lymphoma. Her stem cells have already been harvested last April 2018. Our family have already exhausted our remaining resources to pay for the treatments. We have also accessed the government services available.

We are knocking on everyone's hearts to help us pray for her healing and raise funds for her stem cell transplant. The unexpected complications also incurred additional expenses that we were not able to prepare for. Should you have questions, please feel free to contact me through my mobile number 09976022120 or email [email protected] We are at Day 1 in the hospital.

Rory requested to watch the Ant-man and the Wasp before she was confined. She hopes to watch the next Marvel movie soon. Tomorrow, she will undergo an intensive chemotherapy prior to the stem cell transplant. She started the battle with a bang, as in with new bangs.

Beside Rory is her best friend, Keziah. We are always so grateful to have Keziah with us in this fight. She organized "Paintings for Rory" which aims to raise funds for the procedure. Please see the link provided in the previous update.

Please help us pray for more strength and courage for Rory. Thank you very much! Painting is something Rory usually turns to especially on difficult days. Her room has turned into a some sort of studio- with brushes and papers lying around and traces of paint splatters on the floor and walls. Some of her works are then hanged on the walls. She does not consider herself as an expert but she sees painting as way to cope.

The projected medical expenses will be pricey which is why we decided to put some of her work to auction, with her consent. The "Paintings by Rory" auction is organized by Rory's best friend, Keziah Agripo. Please visit this link:

We already made it to 20% of the target amount. We thank all our donors for their help! Please help us raise more for Rory by sharing.

Battles are never won alone. At this difficult time for Rory and our family, we did not feel alone at all. We are humbled and eternally grateful to everyone for the overwhelming love, prayers, and support. Especially to:

We have reached 13% of our goal. The stem cell transplantation is closer, but we need more to go. Please help us by sharing and/or donating. We are also going to auction more paintings made by Rory soon! Rory is generally not allowed to go to crowded areas because she is immuno-compromised. On very rare occassions, she would request to go outside. This is a photo of her basking in the sun aka photosynthesis pose.

Rory recently wrote a poem entitled "Monsters in Me" for a class. She conveyed how she shall not succumb to everything that is bringing her down, especially her illness. Rory is determined to #FightBack and win her battle against cancer.

Rory did not let her sickness stop her from learning and pursuing her education. She is now a BA Multimedia Studies (BAMS) student in the University of the Philippines- Open University (UP-OU). She also signed up for painting classes prior to enrolling back to UP. Some of her work were exhibited in a mall in Cagayan de Oro City.

She has just recovered from her recent chemotherapy last week. Thank you for praying with us for the success of the treatment. Our family is eternally grateful to everyone who supported the campaign and donated for Rory's stem cell transplant. We have raised to almost 7% of the target goal since the campaign was launched. Our heartfelt gratitude also goes to the bidders of "Paintings for Rory" and Rory's best friends who organized the fundraising activity- Keziah, Krisia, Diane, and Alex.

The autologous stem cell transplant is scheduled on July 2018. Please help us raise enough amount for her procedure by sharing and/or donating. Please help us end this painful chapter of her life and move on to a better and more meaningful one.

Rory was diagnosed with Stage 2 Hodgekin's Lymphoma last January 2016. Even after a series of chemotherapy and radiation sessions, her cancer relapsed on February 2017. She is undergoing a second set of chemotherapy sessions using a newly developed drug specialized for lymphoma. Her stem cells have already been harvested last April 2018. Our family have already exhausted our remaining resources to pay for the treatments. We have also accessed the government services available. Thank you to all who supported the first of the #FightBackRory fundraisers! Your generosity is very much appreciated by Rory and our family. In this simple way of participating, you have contributed to this canvass of her life. This is Rory just a while ago enjoying the beautiful sunset view from our temporary home in Quezon City. For several minutes, she marveled at the spectacular horizon, rich and varied hues, the clouds like great wings of gold, yellow, purple, and rose…