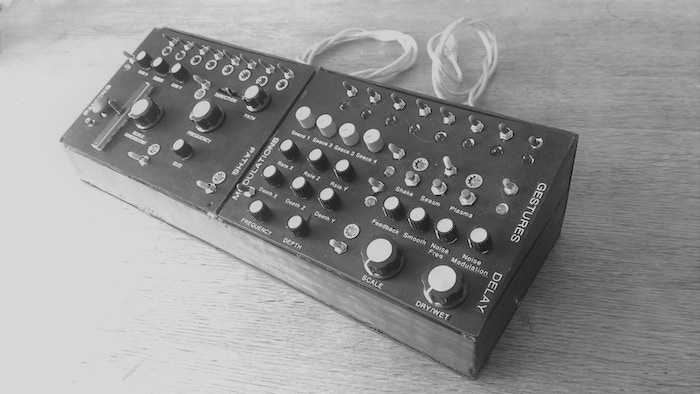 These photos and videos provide a detailed look at this project’s development.

The goal is to develop a catalog of experimental instruments in order to evolve the electronic music production scene. The project will deliver new ways to interact between digital, analog and the physical environment.

The first prototype called “Analog Controller MKI” has already been developed. It's an interface with the ability to read voltage values in your DAW. Furthermore it consists of different potentiometers, jacks, faders & modules that generate voltages in various ways. This also allows you to interface modular synthesizers with your DAW, with 1-3ms of latency and 10 bit resolution (this avoids the MIDI working model that usually troubles the user with constant sync problems, giving 10 times more precision in any control). It works based on the OSC protocol, which enables you to integrate not only DAWs but also video or DMX softwares.

The prototype overall runs with Ableton (Max for Live) and its able to work with any voltage source (Eurorack modules, 5U modules, Moog modules, sensors, switches, joysticks…)

Developed in 2018 for MONOM 4D SOUND System at Funkhaus Berlin and supported from september 2018 by Red Bull Music Festival with the largest 4D Sound System ever built in the world, the “Symphonic Sound System”; 84 speakers and 15 subwoofers with 16 inputs controlled by 512 parameters in real time using 26 knobs, 1 joystick, 2 sliders, 3 momentary push buttons and 26 switches.

The second prototype, a monotone lead synth, is called “Thundervolt MKI”. It features two oscillators, an Attack-Decay-Release envelope, a special one pole filter and several stages of distortion. The synthesizer is able to create sounds ranging from industrial and percussive sounds to harmonic bells, interplanetary pads and distorted basses - and numerous further electronic moods.

The third prototype currently on development is an analogue drum designer (drum machine) "Inmhotep MKI" that is equipped with two different voices. One is focusing on the kick drum & tom and the other on hats, snare, claps . Both voices will be available with individual outputs and triggers.

Eurorack modules will cover a range of innovative designs for EGs, VCAs, VCOs, LFOs, VCFs and many more. A few prototypes for the different modules such "Enveloper" are already completed.

The risks are close to zero due to he fact that I have the first prototypes models done and tested. I already work with the PCB manufacturing company and they never delayed an order, also I have different distributors for the components.

The circuits are designed keeping in mind simplicity and functionality. I worked near to 10 years in the music industry and I expect to deliver testing products in the next months to some artists I worked for, in order to get the first reviews to improve the last feedback step.