This is our story:
In late 2019 we noticed that Õnne has become aggressive towards our family cat Sofia. It began with occasional growls, but soon enough she was occasionally attacking her.
Initially we couldn't recognize what might cause this. Since it happened so rarely, we didn't assume that it can be a serious issue.
At the end of 2019 Õnne began guarding her toys and chews instead of playing with them. Even when she was separated and placed in a covered cage, she continued guarding. Eventually she started attacking everyone around her.
She had never attacked or growled at anyone for the first two years of her life. This is an unacceptable and uncommon issue among Cavaliers - dogs that are considered to be sweetest and friendliest family breed.
Furthermore, there are other weird behavioral or health-related issues that have occurred. She avoids jumping on the couch or bed and the tip of her tongue is out almost always, even though she doesn't have open bite. 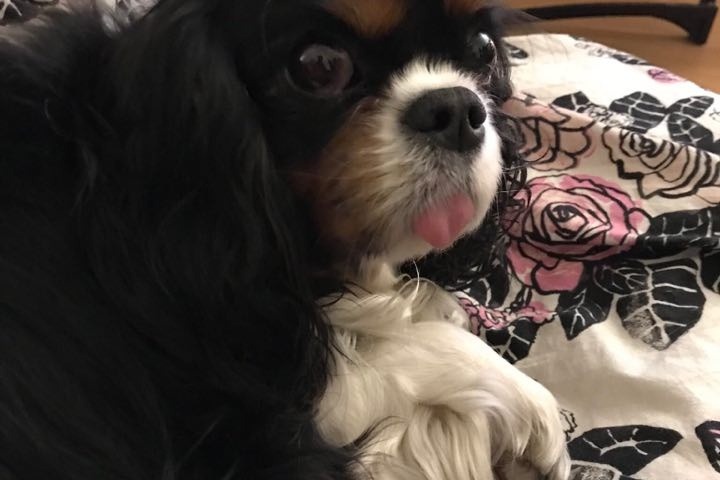 In December 2019 a neurologist at a clinic examined Õnne thoroughly. She told me to consult with a behavioral specialist to make sure whether she is suffering from pain or just resource guarding. Since Õnne started to attack us even without any resources to guard, we became certain she must be in pain.
This expert told me that she is convinced Õnne has syringomyelia. Apparently most Cavaliers who get an MRI scan are diagnosed with it. She also mentioned that specifically Cavaliers with Õnne's head type suffer from syringomyelia. She has been given pain medication since January. However, that doesn't seem to help because her condition has worsened.
We can barely touch her because she becomes aggressive immediately. She attacks both Sofia and terrorizes our second dog Betty who is now afraid to be around her.

Her human mother has been unemployed since November 2019 and due to the COVID-19 outbreak she has no chance of finding a job for a while.
Since MRI scans cost 500€ in Estonia and Õnne is not insured, we are in big trouble. Funds will be used for Õnne's MRI scan, doctor consultation and medication.
We are asking for your help to give Õnne an MRI scan to take further steps.

Please help us find out what is wrong with Õnne. We will keep you updated!

Õnne had her MRI today!

Õnne had her MRI today. She has severe syringomyelia (SM2) with symptoms, severe Chiari like malformation (CM2) and a painful and uncertainty condition called hydrocephaly that means there is too much cerebral fluid inside her skull, causing pressure to build up and press on her brain and skull all the. . . . .

MRT postphoned cause we can't withdraw funds yet

Update posted by Greta Lepik at 11:16 am

We just woke up to most beautiful news ever - We have reached our goal in less than 24 hours!Despite to reaching the goal you couldn't stop donating! WOW, you people are just so amazing and unbelievable! We were able to book MRT time for next Tuesday, 24.03.20. They told. . . . .

Our campaign has been up for only an hour and we already have 35% of our goal!THANK YOU SO MUCH! Words can't describe how grateful we are to see how much you care!Bless you all!