Hello. First of all let me say I am so mortified I am even thinking about asking for any money from strangers but I am all out of options at this point.

Here is the story: my grandpa has been struggling with his health since last September. He had a stroke mid September which he managed to recover from, after which came a number of other medical issues. The first being colon cancer for which he is now finishing his radiation therapy treatment. In addition to that he has since had a double bypass surgery where the doctors took veins from his leg to perform the procedure. The problem is the fact that his circulation is pretty bad and despite having other options, the medical team decided to still use veins from his leg causing serious issues afterwards. Since then his leg has not only not gotten any better but he is now in a serious risk of having to have it amputated since, because of the lack of circulation, his wound did not heal well at all. In fact it has gotten so infected and none of the doctors wanted to do anything about it saying that was the way it was supposed to be. We made a huge deal about the fact that it was getting way worse every day and now, after we have been asking them to look at the wound and help him out, they told us the best thing to do would be to amputate it. We found one last treatment that could work. It is a baro chamber in a private clinic located 130km from where we live and since he needs daily medical assistance twice a day we have to drive 260km each day to get him to treatment and back home to his doctors that clean and tend to the wound afterwards.

The reason I am asking for money is not to pay for the treatment because I have already taken a bank loan to pay for it but rather just to help me pay for the gas to drive him every day so he can continue going since the doctors see a slight improvement now.

I know this means nothing to you, I mean why should it? You don't know me or him. The only thing I can say is that I will do my damn best to try each and every last thing I can to help him. And that is why I am creating this funding campaign.

If there is someone out there willing to help a stranger I would be extremely thankful. I have nothing to offer you in return, unfortunately. I could maybe help you with some translations, writing or graphics design since those are the things I am pretty good at. If there would be any way I could help you in order to thank you just say it.

Attached, I am adding a picture of the wound as it is now. Warning - it is pretty bad so if you do not have the stomach for it just don't scroll down any further.

Anyway, again I am so mortified I am doing this. I literally have no idea what else to do and where else to turn. The amount of money I am asking for should cover the gas through the planned duration of the private treatment.

If you decided to donate I want to thank you in advance. I will try and keep you posted on how everything is going. I am still hoping for a good outcome. 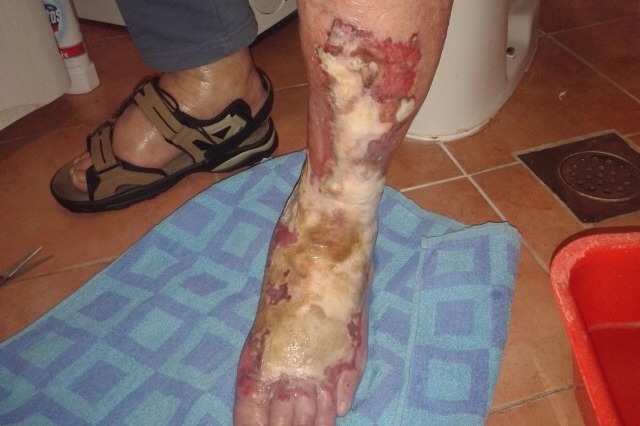