Some research below which is easily available on google

Nowzad is an organisation in Afghanistan that works to rescue stray dogs in that country.A group of stray dogs became famous in Afghanistan after confronting a suicide bomber, preventing fifty American soldiers from being killed. However, one of the surviving dogs, Target, was mistakenly euthanized when she was brought to the United States.

As a result of the virtual extermination by the veterinary drug diclofenac of the vultures which formerly ate animal carcasses as well as dead humans, urban India has two features which create and sustain street dog populations: large amounts of exposed animal carcasses, which provide an abundant source of food, and a huge population of slum and street-dwellers whose way of life includes keeping the dogs as free-roaming pets. For example, Mumbai has over 12 million human residents, of whom over half are slum-dwellers. At least five hundred tons of garbage remain uncollected daily. Therefore, conditions are perfect for supporting a particularly large population of stray dogs. India has the highest number of human rabies deaths in the world (estimated at 20,000 per annum).

In 2001, a law was passed in India that made the killing of stray dogs illegal, and residents often feed the animals as well. In August 2014, the Delhi Police announced plans to recruit some of the city's stray dogs as police dogs, after training them.

In Pakistan, several dog breeds exist including the Gaddi Kutta, Indian pariah dog, Bully Kutta, among others.In the city of Lahore, the Public Health Department launched a campaign to kill 5,000 stray dogs. In 2009, 27,576 dogs were killed within the city of Lahore; in 2005, this number was 34,942. In 2017, after 1700 dogs were killed in the city of RWP,Lahore, Multan the Animal Safety Organisation in Pakistan sent a letter to Chief Minister (CM) "Shahbaz Sharif recommending that stray dogs be vaccinated rather than killed.

Around 80% of abandoned dogs die early due to lack of survival skills.[20]

In Romania, free-ranging urban dogs (called in Romanian câini maidanezi, literally "wasteland dogs", câini comunitari "community dogs", etc.) have been a huge problem in recent decades, especially in larger cities, with many people being bitten by dogs. The problem originates primarily in the systematization programme that took place in Communist Romania in the 1970s and 1980s under Nicolae Ceaușescu, who enacted a mass programme of demolition and reconstruction of existing villages, towns, and cities, in whole or in part, in order to build standardized blocks of flats (blocuri). The dogs from the yards of the demolished houses were abandoned on the streets, and reproduced, multiplying their numbers throughout the years. Estimations for Bucharest vary widely, but the number of stray dogs has been reduced drastically in 2014,[21] after the death of a 4-year-old child in 2013 who was attacked by a dog. The Bucharest City Hall stated that over 51,200 stray dogs were captured from October 2013 to January 2015, with more than half being euthanized, about 23,000 being adopted, and 2,000 still residing in the municipality's shelters.[22] 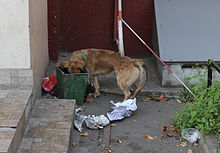 Stray dog eating from a garbage can in Moscow

In Russia, stray dogs have been caught by doghunters' vans and destroyed since ca. 1900. Their sad lot was dramatised by Anton Chekhov in the famous short story Kashtanka, by Mikhail Bulgakov in the novella Heart of a Dog, and by Gavriil Troyepolsky in the novel White Bim Black Ear.