9-month-old Awaiz Shaikh cries uncontrollably when he opens his groggy eyes and sees a nurse tending to him instead of his mother. He is too weak to cry beyond a point and weakness overtakes his body. He cannot move because his tummy is painfully swollen due to a large liver tumor that has landed him in the ICU, where he is fighting just to stay alive.

"My baby boy is a fighter. Even doctors are surprised at how he is resiliently holding on to life despite going through so much. But the tumor has completely destroyed his liver I am scared that I will not be able to save him for much longer."-Shaikh Abdul, father.

Little Awaiz was a normal baby who hardly got sick until recurrent fevers became a daily affair
Baby Awaiz was born healthy and did not have any problems until two months ago. He got a fever suddenly that did not subside even after repeated visits to the doctor. He also developed small boils on his forehead that alarmed his parents. 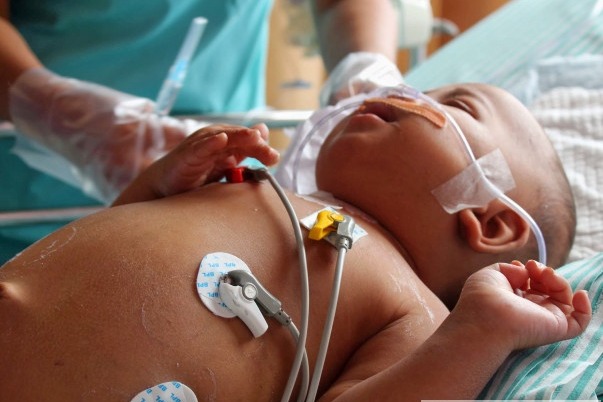 These distraught parents had to take him to many hospitals before he was taken to Bengaluru at last
Little Awaiz’s condition worsened on Eid day. He had stopped eating completely and had almost passed out from high fever. While the rest of the world was celebrating, these poor parents were running from pillar to post in the hopes of saving their younger son.

"Doctors in Goa said we have to take him to Trichy soon. We borrowed money and took him there without wasting another second. But in Trichy also we didn’t get help. Doctors couldn’t understand what was wrong with him. We were told to go to Hubli- but the same events happened there too. Finally, we had to rent an emergency ambulance and take him to a good hospital Bengaluru in the middle of the night because he was almost dying.”-Shaikh Abdul.

This sweet baby is in a critical condition in the ICU, but his parents cannot afford to keep him there
Awaiz is in a dangerous life-and-death situation. Doctors were able to stabilize his condition, but anything can happen if he does not get proper treatment. His father who works in a hardware shop in Goa had to sell jewelry and exhaust his savings to pay off the hospital bills till now. He is not in a position to continue treatment, but his son will die without it.

How you can help:

Awaiz needs prolonged chemotherapy and ICU stay to survive. While he is battling the deadly tumor in the ICU, Shaikh Abdul and his wife Sara are fighting a very different battle. Shaikh has not gone to work for the past month. He used to earn Rs 8,000 a month, but now he is penniless. They have rented a single room outside the hospital for Rs 500 per day and hardly have enough money for food left. Forget ICU charges, even medicines and other requirements are out of their reach at the moment. They need help to save their baby boy.

Help Him
Update posted by hari KRISHNA KATTA On Jul 19, 2018

Hi, please save the boy.

GIVE AND IT WILL BE GIVEN-- JESUS

Hi, please save the boy.GIVE AND IT WILL BE GIVEN-- JESUS…