A street child in Bangladesh is someone "for whom the street (in the widest sense of the word, including unoccupied dwellings, wasteland, etc.) has become his or her habitual abode and/or source of livelihood; and who is inadequately protected, supervised, or directed by responsible adults”.[1]

Street children do not go to school; instead they sell things in the streets or do other jobs as their parents earn less money or do not work. It is estimated that there is more than 600,000 street children living in Bangladesh, 75% of them live in the nation's capital, Dhaka. In a country ranked 138th on the Human Development Index and where 50% of the population is living below the poverty line, these children represent the absolute lowest level in the social hierarchy, in the world's most densely populated nation. Nowadays the population in this country increased, and the number of street children has also increased to an estimated 4 million.[2][3]

There is currently no official statistic of the number of street children in Bangladesh. It is nearly impossible to count their numbers as they increase by years.

There is not any specific age of street children in Bangladesh. Some are 6-12 who sell things and some are 13-15 who do other jobs. Children under 5 can sometimes sell things or just roam around the streets.

Most of the female street children are married from the age of 10, which leads them to a very difficult life. Other male children have to work hard to run their families. 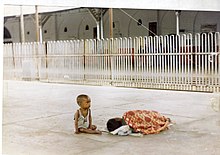 The street children have no particular living or sleeping place. They can sometimes be seen selling flowers on the street.[4]

Many of the street children in Bangladesh die young as they are not properly taken care of. 110,000 children die of water-borne diseases annually each year.[5] They are incapable of buying healthy foods. They sometimes eat foods which are not hygienic. Sometimes they will starve looking for food.

Street children often have to work. Some do so within the lower echelons of organized crime groups. Organized crime is prevalent in Dhaka. The bosses are called "mastaans", and their groups operate in slums across the country and particularly in the capital. Criminologist and strategist and international consultant Sally Atkinson-Sheppard conducted an in-depth study about the involvement of street children in organized crime. [6]

The street children in Bangladesh are unable to go to school and as a result, they do not get proper education. It is very important for them to study as they will find themselves spending the rest of their lives miserably. The non-government organizations help them to be educated.

Thank you so much for homeless people helping ..