Hezekiah was gifted to us by friends at 12 weeks old. It was clear to us that Hezekiah was a special pup the day we met him. He's confident, calm and affectionate. He's absolutely gorgeous and he was an answer to many of his new dad, Darrin's prayers because he had dreamt of having a rottie companion for years.

As we got to know him a little better we just couldn't believe how perfect he was for our family. Hezekiah has 3 human siblings who are under 6 years old. Besides one or two incidents thanks to sharp puppy teeth, he quickly learnt how to play gently with his humans. He also took to his training like a champion. He could do new commands within minutes. He loves playing with his new pup-sister, Gala the border collie. She was absolutely thrilled to have a new friend!

He just didn't seem to have a whole lot of energy, though, he would lie down doing most things, like chewing up everything that lies around or eating his food. At first we just thought he was a "low-energy" dog. Unfortunately we couldn't have been more wrong....

On 08 October 2019, at 3 months and 2 weeks old he started limping quite obviously after a play session with Gala. The next morning I took him off to Zwartkop Animal Clinic near our home, where the vet, Dr van Vuuren performed a physical exam and xrays. During his physical the vet told me he could feel that there's big trouble up ahead. The right hip was dislocated and the muscle under developed. What we had believed was low energy was Hezie showing signs of pain and we didn't realize it. The xrays confirmed our fears and worse. Hezekiah had the worst case of hip dysplasia he had ever seen in such a young dog. 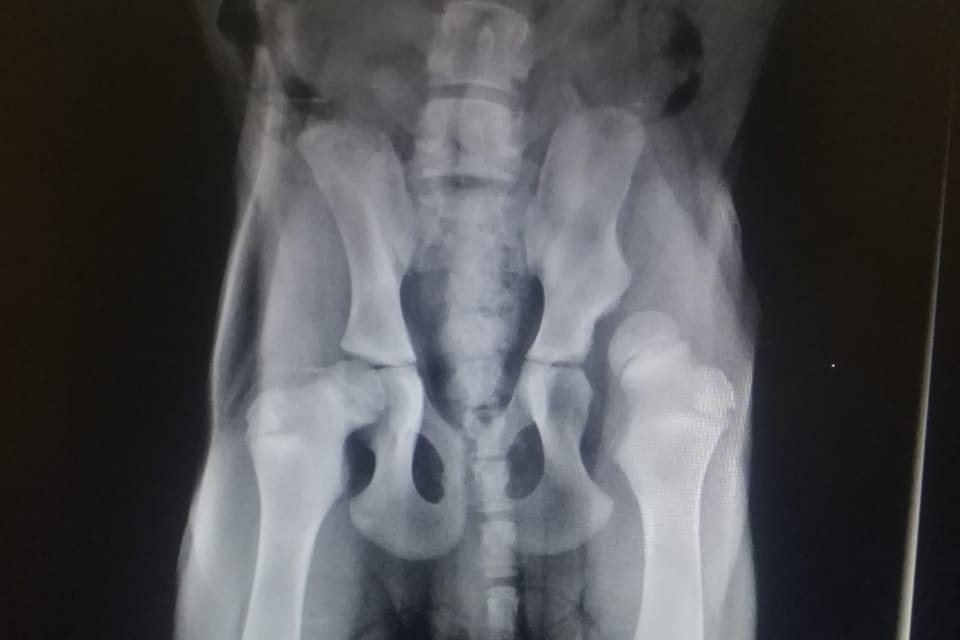 He advised me on 3 courses of action.
1. Take him back to where we found him. (That wasn't an option, he would likely be put down or left to live in pain)
2. Euthanise him (the vet advised that it would be his decision)
3. We could do a femoral head ostectomy, which he had never done on such a young puppy so he doesn't know how well it will work or can guarantee that he will be pain free thereafter.

I left the vets office devastated, i phoned my husband to give him the news and although it broke his heart he said that we can't allow a dog to live in pain.

Later during the day I contacted a friend of ours who is also a vet for a 2nd opinion. She also said it's one of the worst cases she had seen but said that she saw great success with this surgery being performed on both legs of a 7 month old lab who went on to live a wonderful, pain free life despite being a large dog. She recommended we try the surgery.

So with this information in hand we are going to try tackle our next obstacle, raising the necessary funds for Hezekiah's surgery. He deserves a chance at a good life and someone who will fight for him!

Every donation received will be greatly appreciated and we will gladly be open with financial statements should you wish to see if your donations are being used wisely.