Canadians want to see their resources developed, he said.

Where Canadians have no say over the pipeline or oil sands

Where you don't have to pass a law to get a pipeline built,

You don't have to buy an energy project in order to de-risk it,

"We want an energy sector where the private sector has confidence

In getting our resources to markets."

As Prices Continue To Plunge

Alberta is losing billions every year because of "Air Barrels"

The government estimates Alberta is losing

$80 million a day due to discounts, to Fight "Air Barrels"

Because of lower prices for Canadian crude

That is very good at being profitable

If given the freedom to do so."

And won't fix the pipeline bottlenecks crippling the province.

Allowing big players to continue to scam the system,

Moreover this problem has existed for years

Even if we had 10 Pipelines

To game the pipeline system,

While provincial and federal Governments have done little to end

The gaming of the pipeline system.

“But instead of fixing the problem the regulators

Allow big players to continue to scam the system,

Standing idly by while royalty payments to Albertans are eroded”

Alberta is losing billions every year

Canadian Natural Resources estimated last spring that as much as

125,000 barrels a day of capacity on Enbridge Mainline is running empty

Because of air barrel nominations.

Recent throughput statistics on Enbridge’s system Suggest it could be

We had 100 years of Alberta oil

Our Current Outstanding Public Debt of Canada is approximate:

Will be $71 billion of debt by the time the

Without factoring in the cost of the Olympics,

The Notley government has the province on track for 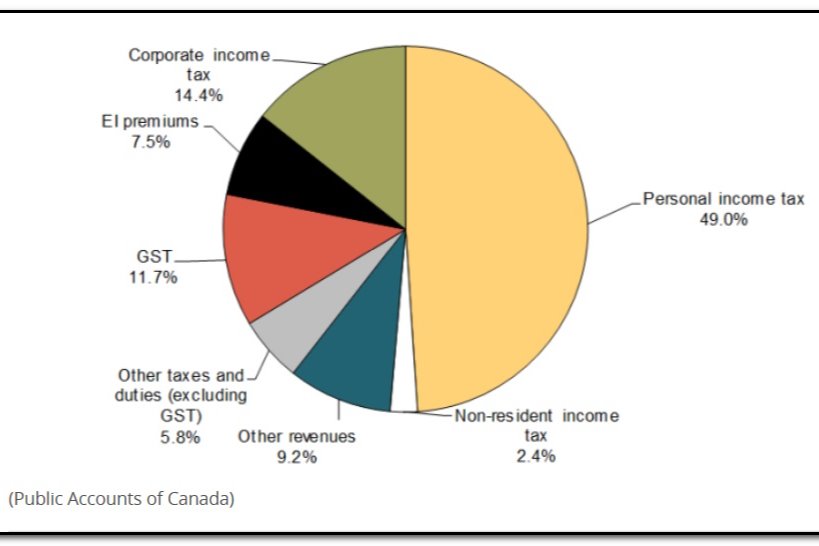 The Canadian budget makes it abundantly clear why

Because the only people paying the debt off is you

Canadians we will have nothing but Debt

The Alberta Tar Sands have been dubbed the largest

What would it cost you to clean up Alberta’s oil patch? $260 billion today

We only have $57.8 Billion to clean up Alberta’s oil patch

Because they have over 70 years to Clean it Up

The NDP and the United Conservative Party

Made the statements as they teamed up

To shut down emergency debate on the issue,

They have been granted until after 2100 to

Figure out how to clean up their tailings and reclaim the land.

After the Federal Court quashes the Trans Mountain Pipeline,

Has vowed to use every possible means to

The NDP. Government of Alberta

Approved a tailings management plan for

The oldest mining company in the Canadian tar sands.

By approving this plan,

Suncor will get an additional 70 years after their operations

Shut down to clean up the

Environmental mess that they have created over The Alberta Tar Sands have been dubbed the largest

An area of land equivalent to 73 New York Central Parks.

Has been identified by the US Department of the Interior

As the world’s largest dam.

Many of which date back 40 years.

Another 100,000 or so wells have not officially

Declared abandoned or inactive but have

Been paying no royalties to the

Provincial government and will likely also

Become the problem of taxpayers and Landowners.

The looming, multibillion-dollar cost of cleaning up

What would it cost you to clean up Alberta’s oil patch? $260 billion today 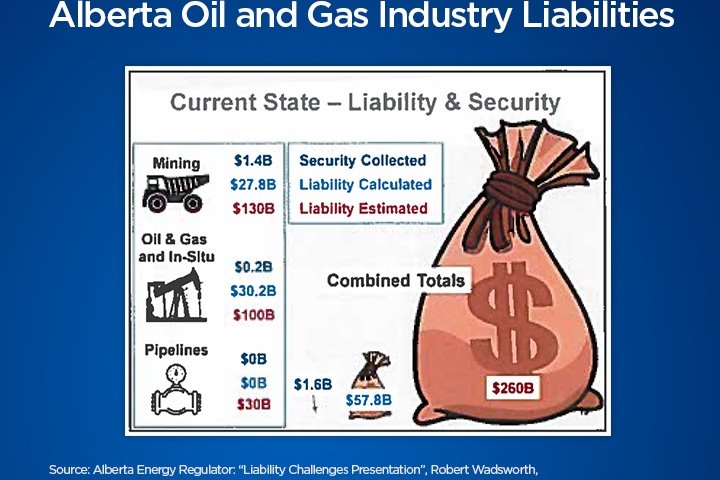 While Suncor’s mine will close down in 2033,

They have been granted until after 2100 to

Figure out how to clean up their tailings and reclaim the land.

But the Canadian governments

Continue to hand out billions of dollars in fossil fuel subsidies,

Tax provisions available to the industry.

All you have to do is look at the Government's graphs

You will see what is really happening in Canada

Are clearly being sold off for ever-decreasing benefit," 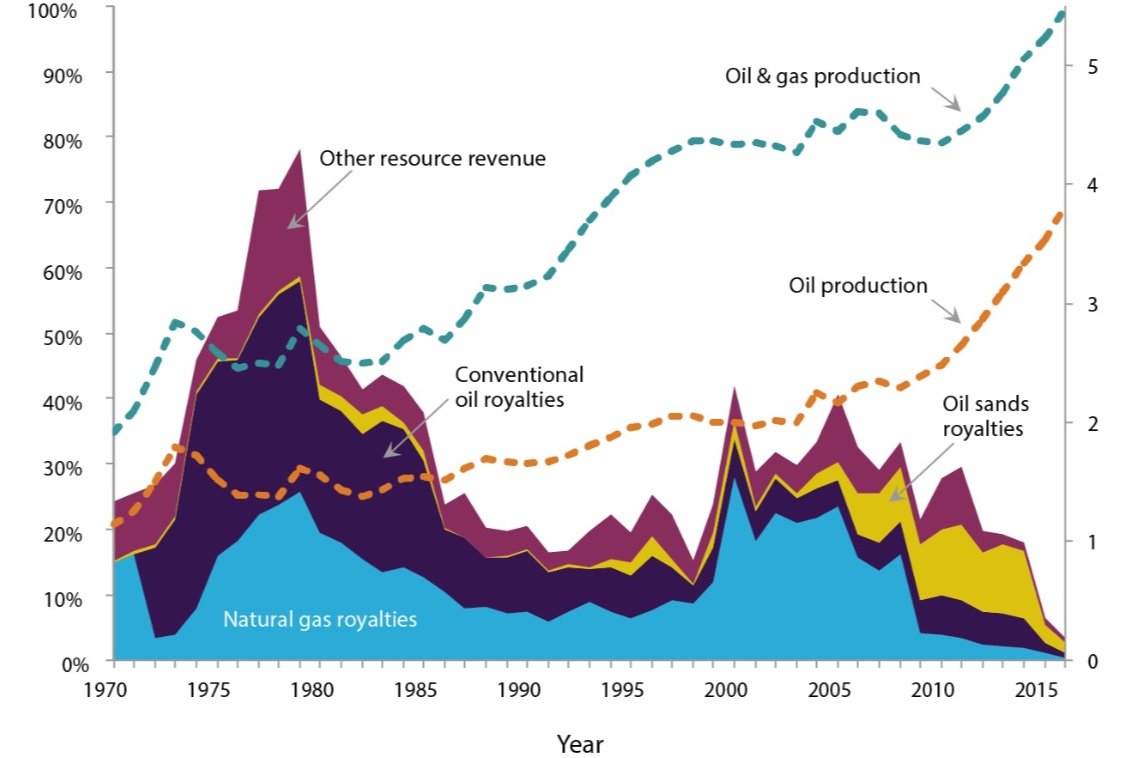 The only thing Canadians get is a Job to pay for roads, schools and hospitals

Canadians you will never be able to pay Canada's debt off

You are paying interest on the interest

On the federal debt to private lenders.

From the private sector

The Cost of Government Debt in Canada, 2017 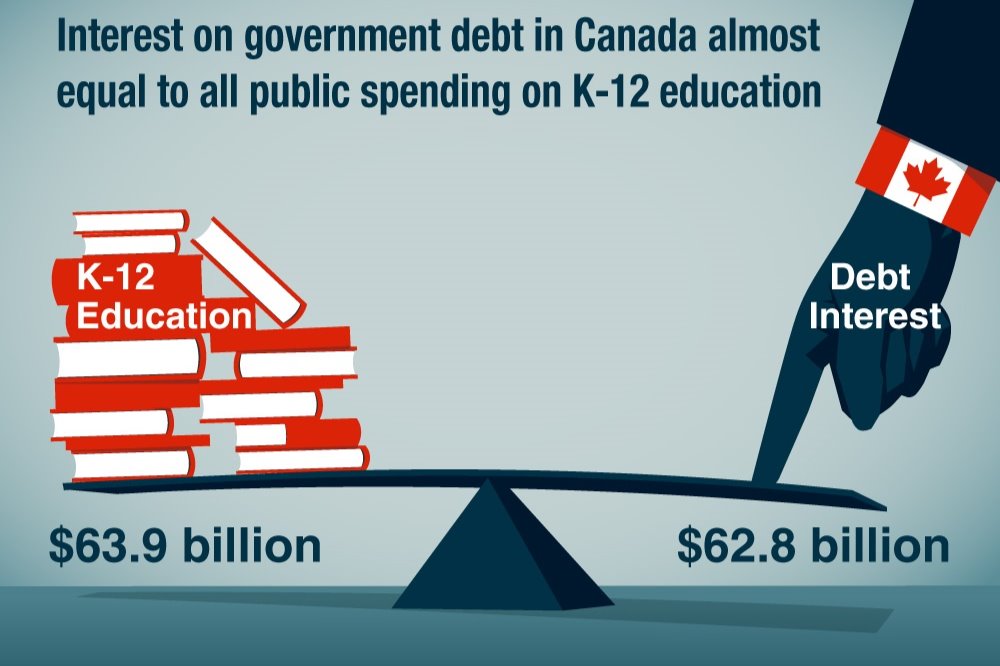 In 1974 the Basel Committee was established by the central-bank

A key objective of the Committee was and is to maintain

To achieve that goal,

The Committee discouraged borrowing from

A nation’s own central bank interest-free

And encouraged borrowing from private creditors,

All in the name of “maintaining the stability of the currency.”

Our Current Outstanding Public Debt of Canada is approximate:

Rather than creating money through the Bank of Canada interest-free.

Canadian taxpayers have paid one trillion,

This accumulated debt was monies borrowed to service the debt,

Essentially a payment of interest on interest

To understand how ridiculous the present situation is,

This “subsidy” to the private lenders must end.

Money from private lenders at interest and borrow from the

Bank of Canada at no interest.

The private banks should also be prevented from creating money.

That right should be returned to the People of Canada

Through the Bank of Canada. Alberta, produces over 2.5 million barrels of oil per day

The more oil and gas production go up

Royalties and Government revenue from oil and gas

Goes down to nearly nothing

Royalties could amount to merely 1 per Cent

And Canada provides more subsidies to petroleum as a proportion of

Government revenue than any developed nation on Earth

Because our Government gives away Canada's oil

For far less than any other Country in the World

That it did in royalties from oil companies

Canada is number one in the World

Canada provides more subsidies to petroleum as a proportion of

Government revenue than any developed nation on Earth

Two-thirds of Canadians are strongly opposed to

To subsidize oil and gas companies.

Despite this significant public opposition,

The Canadian governments continue to hand out billions of dollars in fossil fuel subsidies,

tax provisions available to the industry.

He made the pipeline a National Security Issue

It's in the national interest of Canada

The Government needs these Jobs to keep our economy going

The Canadian oil and gas industry

The big Five gets all the oil and the subsidies they are doing just fine,"

Banking and paying out to shareholders $13.5 billion last year.

Canadian government continue to hand out billions of dollars in fossil fuel subsidies,

This is what the Canadian Government does not tell Canadians

If you look at the second Government's graph you will see

What the real cost are for these good paying jobs

The Canadian oil and gas industry now employs about 180,000 workers,

Alberta, produces over 2.5 million barrels of oil per day

Just to keep one full time worker [working] for a year

Then It will cost three times more oil

Canadians we will have nothing but Debt

The Real Truth is

The only thing Canadians get is very few Jobs to pay for roads, schools and hospitals

This is why Canada is the next Argentina

This really has to end

It's time we fight for Canadians

Because if you don't Canada will be the next Argentina

Canada should be one of the Richest Nations in the World

But our Resource-Rich Canadian Government is Always Poor

It means every Canadian Man . Woman and Child in

Many Canadians accept the situation as normal,

Something that can't be changed
.
Yet they do not question the absurdity of this reality.

Please read this and send it to all your friends

Because this really has to stop

Because if we don't Canada will be the next Argentina