Hello.
My name is Insa Tiaden, I am about to (finally) start PhD studies at Trinity College Dublin, and I need your help.

point, but every step has also meant that I'm coming closer to my dream.

able to complete my education, all the way back to even finishing

school, but let me start at the beginning.

When I was in my

so that my mother was the only breadwinner in the family. He also became

more and more reclusive, but that was such a gradual process that we

didn't really realise what was happening until it was too late. By that

point, I was staying at home with him more often than not, to help and

look after him, but also because I felt increasingly isolated and

anxious at school, since my home life was so totally different from that

of my friends. Ultimately, I had to leave school without graduating,

due to my low attendance rate. When I was 16, an aneurysm burst in my

fathers brainwhich left him in a vegetative state. He needed 24/7

specialist care by professionals, but I still tried to be there for him

as much as possible.

It was a absolutely horrible time for all of

to move much at all, but he was able to breathe on his own, and he was

also able to cry, and there was nothing we could do to help. He died two

years after he had had the aneurysm, almost to the day, and only three

weeks shy of his 65th birthday.

After his death, I started

several attempts to catch up and still obtain my school-leaving

qualifications. All of these attempts failed miserably, however, because

of panic attacks which lead to me becoming incredibly stressed about

never being able to study or get a good job, which lead to more pressure

and more panic attacks, and so forth. I always loved to learn,

sponge, which made it all the more frustrating that I seemed to have

become my own worse enemy when it came to access places of learning.

I was diagnosed with severe depression. I also met my first love, and I

will be forever grateful to him and the doctor, who got the help I

needed, to enable me to finish the three years of school I needed to get

through. It was still a bumpy ride, but I did get to the finish line.

seemed, and still seems to me, that I am a pig that managed lift off,

I grew up in Germany, and during the time I stayed

at home I fell in love with the English language. It, and languages in

general, became my passion and now, finally, I was able start studying

English language and linguistics at university. There were more set

backs, and I'm still getting treated for depression, but I also finished

Master's degree at Edinburgh University (even higher) and one at

University College London (and higher still). My wonderful mother has

supported me through all of this, emotionally and financially whenever

possible, and I have worked in supermarkets as an undergrad and various

other jobs in between masters. My last job in the UK as a research

assistant was funded by the EU, but my contract did not get renewed

I decided to take this as a sign: it was time

to try and let this pig reach her ideal flying altitude. And amazingly, I

did get accepted to do a PhD at Trinity College Dublin, and with a

professor whose work has inspired my own research for years now to boot.

Unfortunately, it now turned out that a good chunk of the funding does

money like this, and I will study part time to be able to work hard at

myself, but it has been such a very long and sometimes steep road to get

to this point that I can't give up now.

If you can spare

even one euro please help me realise my ultimate dream, if not then

please PLEASE share this page with your friends. The target amount would

approximately cover my university fees for a year.

What ever you are able to do, THANK YOU from the bottom of my heart!

I attached the TCD's unconditional offer below, I was originally

September because of the funding situation. 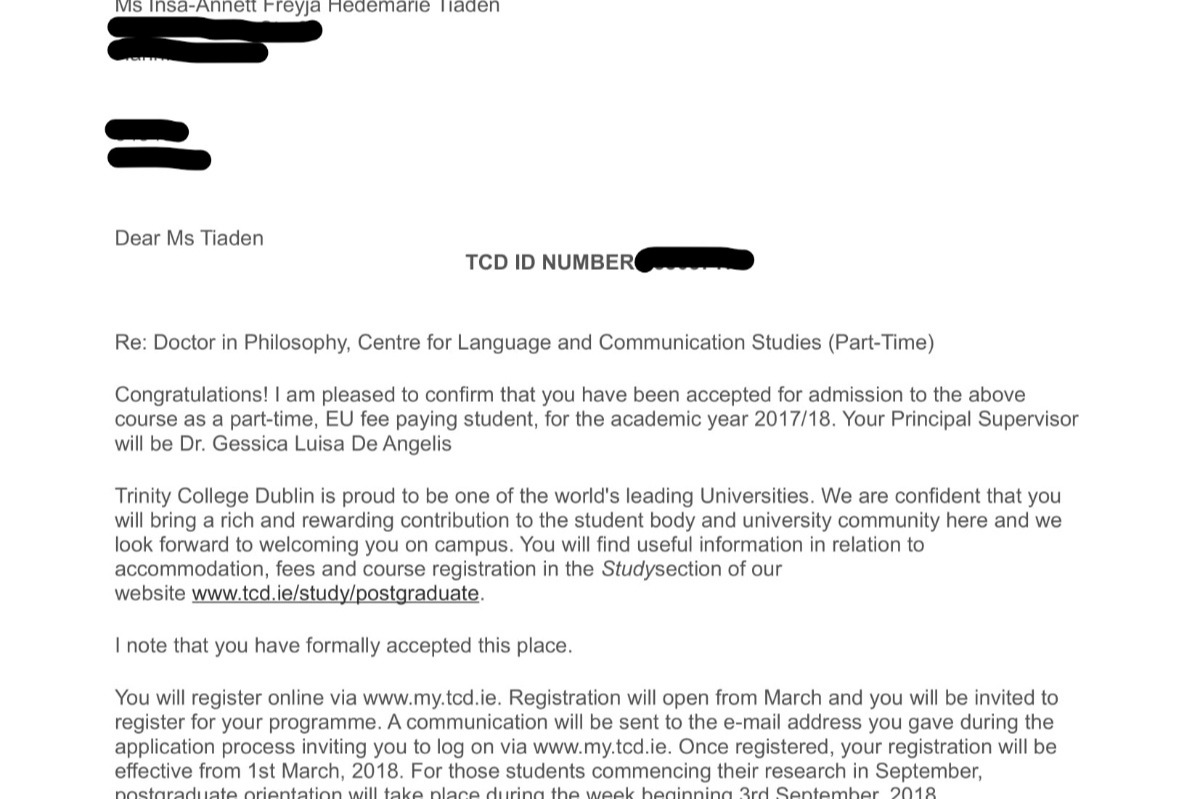