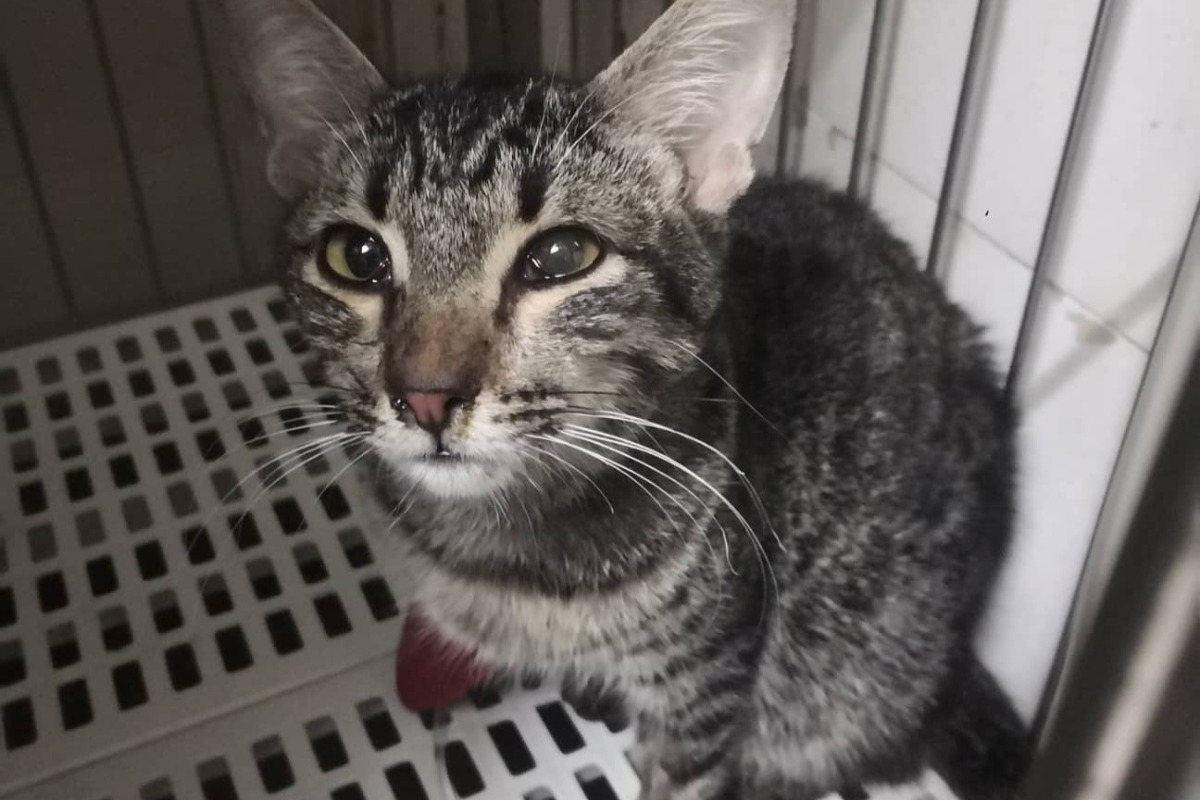 Hello everyone this is my cat Joker. He's 10 months old. I had him since he was 2 week old.

Tuesday morning (Oct 15) we were looking for him because my dad told me that he didn't eat and something looked off with him. After a few hours he went home he was drooling a lot. I got scared I just lost his sibling last friday and Joker looked exactly like his brother. He was drooling and retching and his saliva was stinky. I thought he was poisoned so I fed him sugar (I'm sorry I think only filipinos do this as first aid if the pet was poisoned). I cleaned his face and then I put him in the cage. I gave him food and water. I checked to see if he would eat or drink but he didn't.
He was freaking out in his cage and he wanted to be let out.I rushed him to the vet. I told the vet what happened and he told me that he'll do a CBC. They put Joker on the examination table to get his blood and temperature. His temperature was 40C which means he has a fever. Joker was resisting the tech and the vet was trying to shave his arm and get his blood due to his resistance he injured his veins. The vet had to move to his other arm I coaxed him to cooperate and he did so they got his blood. We waited for a few minutes for the result.
This is the CBC result https://www.facebook.com/photo.php?fbid=10212508424305365&set=a.10212508352063559&type=3&theater. Leukopenia, neutropenia, lymphopenia, microcytosis, and thrombocytopenia was the diagnosis. The vet explained that this could indicate a chronic infection he told me that they need to do another blood test which is the SNAP test for felines. Joker tested negative in FELV but was positive in FIV. I don't know where he got it probably from his mom as all his siblings also got flu and conjunctivits when they were still a baby.
The vet explained that FIV is equivalent to AIDS in human and it has no cure. I asked him what is the best action and he told me that I must confine Joker because 1) he has a fever 2) he's dehydrated 3) they'll observe if he will respond to the treatment to lower his fever and normalize his CBC and 4) hopefully Joker get's his strength back. I asked for how long and he told me approximately 3-5 days. I told him okay and to take care of Joker.
Joker is still confined at the clinic. Its almost 3 days now and he still has fever. He still wont eat and they had to force feed him but he bites them so they had to put collar on him so he won't bite and remove his IV line. He just stays in the corner of his cage. He perked when I called his name he tried to get up but he can so he tried to crawl. So I picked him up and gave him TLC that he definitely needed and deserved.
The fund will be solely used for Joker. It will pay for his confinement fees and what not. I also need to have him neutered as the vet advised me that he shouldn't go out of the house. The first day of confinement is 2,500 Philippine Peso about $48.72 USD and succeeding days is PHP1,500 ($29.30 USD).

I do not not know how long he still has to stay there. Hopefully not for long as I am solely paying for his fees. I am running out of funds as I am just a graduating student. I have no job, no income. I currently live with my parents but they would't let me borrow some money as they told me that I should be the one responsible for my baby. A little help would be greatly appreciated.
I had him when he was still a baby along with his other 3 siblings. All four of them had a flu and conjunctivitis. 2 babies did not survive the flu but Joker and Bruce survived. Bruce suffered with corneal ulcer. His right eye was popping out of his eye sockets. He survived but he went blind. I lost Bruce just this Friday (Oct 11). He went missing for more than a day before passing. I looked everywhere for him. He went home alone and when he got back he was drooling a lot, he had tears in his eye and he smelled bad. I cleaned him and I brought him to the vet but his body just couldn't make it. He died the next morning. The vet said it was due to severe dehydration there was no other possible diagnosis.
They're my children. I don't want to lose Joker too. He means a lot to me. I know that he wouldn't live that long but if I can do something to prolong his then I'll do it. I know he really wants to go home and cuddle with me.
I know I am asking to much but please lend me some help. I just want my baby to be here with me after his fever goes down. I don't know when that will be but hopefully the soonest. He is a good boy and he deserve lots of love, cuddles and kisses.
I am forever thanking you for helping my baby. I hope God showers you with lots of blessing and a good health. Thank you and Godbless!