Bring Back An Aneurysm Survivor To Life, Be A Part Of A Miracle Would you like to be a part of the miracle musician's story?

This is the story of an ongoing miracle. This is the story of light cracking through struggle, hopelessness, pain and disbelief. I've read about thousands of aneurysm survivors and every one of them just focused on how devastating the first shock was and how the patient managed to get up on his feet again quickly. No one ever mentions the in between. Can you imagine how heartbreaking it is to read all of those, while stuck between darkness and light?

One day in 2020, my father was getting prepared to go out. All of a sudden, just like a snap, he dropped his bag, his smile withered, his left side went numb. We rushed to the hospital, thinking we left the worst part behind. How wrong we were...

At the emergency department, he could still talk in a slurry manner, and he tried to assure us he was all fine; telling us that he could recall our names, birthdays and he even can stick out his tongue. But the CT scan revealed a massive intracerebral hematoma (brain bleed) and a giant aneurysm rupture. The last thing he said, before he lost his consciousness was: Give my wedding ring to my daughter.

He received immediate acute care and rushed to an emergency brain surgery, which lasted for 11 hours. The waiting was just like living hell, in slow motion. The doctors didn't give us hope either. The location of the aneurysm was very delicate (MCA region) and its size was massive (around 4cm) and his chances of survival was very slim. He also had a 5th grade hematoma. 90% of patients like that couldn't even make it to the emergency room. But not for a second we lost belief.Their words hovered thorough the air and vanished...

The wait was finally over. At least, we thought so. The surgery was "successful". The hematoma was evacuated and the neck of the aneurysm was clipped. Because of the excessive swelling, they had to take out part of his skull, so that the brain can have room to expand and they sewed the bone flap to his abdomen.

Although the surgery was said to be successful, he slipped into a coma. And for 45 days, we were in purgatory. After a couple of weeks, even some of the doctors gave up on him and thought he would spend his rest of life without even waking up. But we did not. Our love triumphed the coma. We studied thousands of academic papers and with the help of the doctors, who actually chose to believe us; we used a Parkinson's disease medicine called PK_Merz among with several medicines. On the top that, we talked to him everyday, made him listen to him his favorite performances. And miraculously, he woke up and started to respond.

First, he opened his eyes, then he started to wink for yes and raise his eyebrows for no. Afterwards, he started to move his right hand fingers. Every step of the way, he has beat the odds.With a great struggle, we got rid of the tracheotomy. Now, he can move his right arm and fingers, his right leg and both toes. He can move his head, sit on a wheelchair, understand and laugh at our jokes and swallow his favorite meals

But all of these were easy to write but hard to accomplish. Me and my mother had to sacrifice so much during this process. As a developing country, Turkey's health system tries to keep the patients alive, but it has no interest at all about the quality of their life afterwards. My father was discharged from the hospital with a tracheotmy, so that he can breath. It was heartbreaking for us to see him unable to speak like that. He had paid for government insurance for all his life but all he can get in return is 30 diapers, formula food and 4 packages of sterile gloves, because they see brain damaged people as lost souls, who just survive. But I know that if given the chance, they can live, laugh and function well.

The emotional weight of this situation is debilitating enough, but when you add in the financial toll, the stress is too much for me and my mother to face alone. Since he needed 24 hours special care, I dedicated my life to him and had to quit my job. My mother, who is a cancer survivor herself isn't healthy and can't cope with all of these alone. I did everything in my power to get my lively, happy and loving father back. Physical therapy everyday, swallowing therapy, visiting neurologists at home, special medications and supplements that would make him more active and many more...

I knew that if he is given the chance, he has the strength and will to get back on his feet. So, I did not want to deprive him from this opportunity. And he did blossom like a flower. Now he can move his right arm, hand and feet. He can laugh at our jokes, understand what we say perfectly and call out our names and try to talk back. Turkey doesn't even have a neuro rehabilitation facility at all, so I had to plan all of his treatment and hire professionals by myself. The progress that he accomplished, made us so happy but in the meantime financially, I've lost all of my savings and belongings.

His doctors and I know that he can do many more. Since his dominant (left) hemisphere is unharmed, he will be able to speak perfectly, move his limbs and even walk with help. I know, physiotherapy can create miracles from experience. First two years are critical for patients like my father. Hiring physiotherapists for another year and an additional robotic rehabilitation will get his freedom to move. Speaking therapy will finally make him be able to speak after a year of living with a tracheotomy. I have planned each step but all that I lack is unfortunately, money.

My father is a medical miracle and if he is given the chance, he can be an alive proof of what rehabilitation can accomplish for brain damaged people. I know, helping only one person may seem unimportant, but together with my father, we have accomplished so much and I’m sure that we are so close to a success story, that will inspire many people and change the nation’s policy of not helping such patients to develop more, but merely just keeping them alive. It would devastate me to stop at this stage, because of my insufficient funds.

A total amount of $20.000 would be enough for us to create a miracle. I'm writing this to show that, even the seemingly impossible-to-wake-up cases have a chance to live a normal life. And to show this, I need to finish what I have started with my father.

By deciding to help me, you will not only save one family but you will also bring hope to many families out there who have experienced brain aneurysm. After my father's treatment is completed, I am planning to launch a foundation to raise awareness on the importance of neurorehabilitation after recovering from brain injury and stroke and the need to change healthcare policies to improve the pathways to recovery. So, together, we can touch the lives of many people.

I'm wishing and hoping that you'd reply and help us. Our life turned upside down in a minute and you have the strength to reverse this. Please do choose to do so and change our lives and start a flow, which will touch upon many other lives.Thanks in advance for reading and caring. 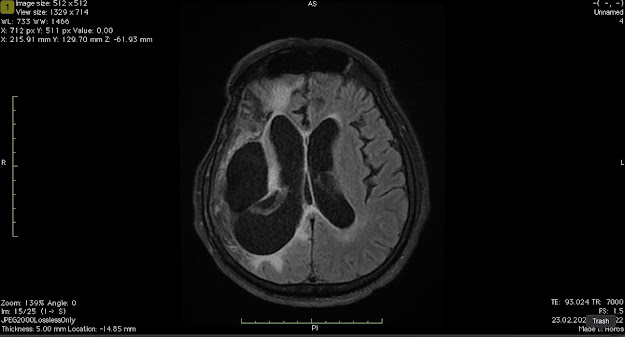